Significant investments in public and private infrastructure have transformed Florida’s Capital into a top destination for businesses and residents alike. In tune with the growing demand for urban space, Tallahassee-Leon County has started to reap the rewards of smart, intentional investments such as gateway corridors, complete streets, a downtown trail network, stormwater systems, sidewalks, parks, and other public amenities.

These strategic infrastructure improvements are catalyzing a noticeable return on investment to both residents and local businesses. In exchange for public spending on creative, functional infrastructure, Tallahassee-Leon County is gaining more vibrant, accessible, and sustainable urban systems, with a total expected economic impact of $1.2 billion by 2040.

The Penny Sales Tax
Where did it all begin? In 1989, Tallahassee and Leon County voters approved a local option one cent sales tax to provide funding for transportation projects and law enforcement facility improvements. A major driving force for the extension of the 1989 sales tax extension was Blueprint 2000 & Beyond, a citizen-initiated plan for community investments. In 2000, voters approved extending the penny sales tax until December 31, 2019, with a prioritization on transportation capacity improvement projects, stormwater and flood control projects, green space acquisition, and parks and recreation improvements. An overwhelming vote in 2014 allowed for an additional extension of the program from 2020-2040. This next phase also created the Office of Economic Vitality and allocated 12% of future sales tax funds to economic development efforts.

Key Projects from 2004 – Present That Have Changed the Face of the Community
A single cent on the dollar has added up to 12 holistic infrastructure projects and over $325 million in community investment, which has collectively enabled Tallahassee-Leon County to leverage over $125 million in state and federal funding. This creative penny sales tax funding mechanism has resulted in world class, multi-use public infrastructure that will sustain the forecasted population increase and meet the growing need for infrastructure improvements as more businesses choose to locate in Tallahassee-Leon County.

Improving our capital infrastructure not only plays an important role in job creation, it also makes Tallahassee-Leon County more attractive to businesses seeking to locate or expand within the community. Businesses look for many resources and factors when choosing a location, many of which – such as efficient transportation, access to markets, high quality of life, availability of utilities, and land use compatibility – are directly tied to capital investments. Two major examples of public infrastructure projects that have resulted in a significant return on investment are the Gaines Street and Cascades Park areas. 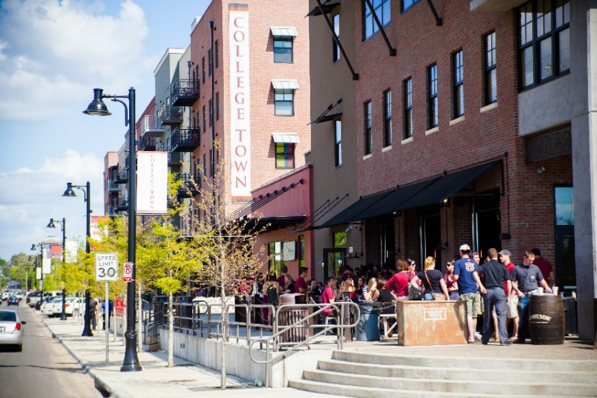 Cascades Park, an award-winning stormwater facility cleverly disguised as a unique urban park, demonstrates the nexus between capital investments, urban planning, public health, and economic development. This facility benefits both citizens and businesses in the adjacent downtown and south side residential communities by relieving flooding; attracting pedestrian traffic through recreation and events; promoting active living; treating urban runoff pollutants; and improving connectivity and traffic flow between the FAMU, Downtown, and College Town districts. In addition to the quality of life benefits generated by the park’s creation, Cascades has directly generated $130 million in private investment by North American Properties in the downtown area immediately adjacent to the park, exceeding the $33 million in initial public investment. Cascades Park is a premier example of holistic planning, using a single existing need – stormwater runoff mitigation – as a catalyst for increasing adjacent property values and our community’s quality of life.

What will Tallahassee-Leon County Look Like by 2040?
Within the next five years, Blueprint 2020 will have eight projects in the planning, design or construction phases, with an estimated local investment exceeding $125 million. Projecting even further, from 2020-2040, the Tallahassee-Leon County Planning, Land Use, and Community Enhancement (PLACE) Department – including the Office of Economic Vitality, Blueprint, and the Planning Department – has identified 27 projects with an estimated $756 million in revenue. The new Blueprint 2020 sales tax extension projects, informed by extensive community outreach and engagement, include those which target five citizen-identified priorities: Connectivity, Gateways, Community Enhancement, Regional Mobility, and Quality of Life. In total, the last sales tax extension is expected to have an estimated $1.2 Billion economic impact.

Our community’s commitment to the strategic, intentional capital improvement projects above have an exponential effect. These projects, driven by a community vision to make Tallahassee-Leon County more livable, accessible, and sustainable, help spur economic development through the businesses they attract to the area, as well as the jobs they create. This business attraction, in turn, generates new sales tax revenue, multiplying the funding available for future projects.

The Department of PLACE’s commitment to create a livable, sustainable, and economically vibrant community is evident through its innovative, citizen-inspired public investments. These creative capital infrastructure strategies are integral in driving economic vitality in Tallahassee-Leon County, Florida’s Capital for Business. 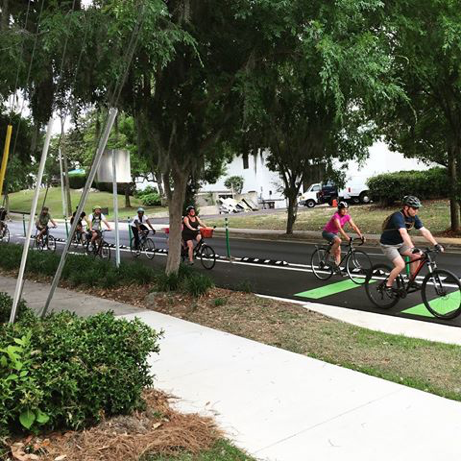 The Annual Economic Review is a one- and five-year retrospective of the 13 indicators featured in the quarterly economic dashboard. Annual data gives wider context than quarterly updates, enabling the evaluation of long-term strategic objectives. Whether an indicator is positive, negative, or neutral depends upon one’s perspective. Policymakers like tight labor markets more than employers

Focused on setting the highest standard in public service, Leon County received 9 national Achievement Awards for exceptional County programs and services from the National Association of Counties (NACo), bringing the County’s total to 95 NACo awards since 2013. Annually, NACo seeks to recognize innovative county government programs from across the nation. With awards in